Our clients wish to make a positive difference to their bodies, wish to see quick results, whether for medical reasons or simply to get a stronger, better looking body. The youngest client at Ultimate Strength has been 12 years old; the oldest 86.

We welcome referrals from GP’s and Osteopaths. 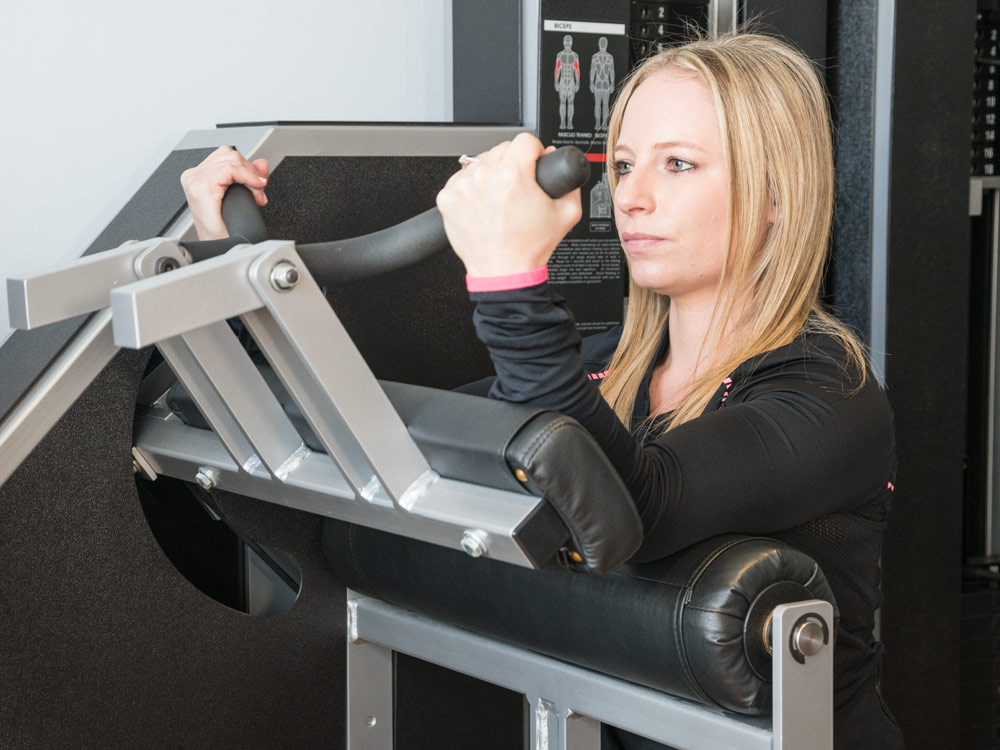 Will I work to high intensity from my first session?
No. The first session consists of a consultation, a medical history and an introduction to the weight training machines. Before high intensity is reached, you will need to become familiar with the techniques of strength training. The weights at the beginning will be manageable. Once you have perfected the techniques, the weights gradually increase, eventually reaching a level of high intensity.
Why don’t I perform multiple sets like at other gyms?
Muscle groups are composed of thousands of fibres. These fibres work together but fatigue at different rates. They are classified as slow-twitch, intermediate and fast- twitch. When you start an exercise the slow-twitch (type 1) fibres are activated first. When they tire, fast-twitch (type 2a) fibres are recruited, which have much less endurance than type 1. As the type 2a fast-twitch fibres fatigue, they are replaced by the type 2b fast twitch-fibres, which will have even less endurance. When the type 2b fibres tire, the muscle is no longer able to finish the repetition and the set must be stopped. If after a few minutes rest you perform another set, are different fibres involved? No! The same fibres as before are recruited again in the same order. Therefore, you will gain maximum muscle stimulation from one set. Any more than that is a waste of time and your recovery ability.
Don’t I have to do aerobics to burn fat?
There is a common misconception about the role that aerobics plays in fat loss. It is commonly thought that exercise burns a significant number of calories. It does not. Fact: One pound of human fat contains 3,500 calories. That’s enough to keep the average person going for a 50 mile run. An hour of aerobic activity may burn about 300 calories. Performed three times per week, it would take several months to lose even a small amount of fat. Often, weight lost from this type of activity comes from tissues throughout the body – muscle, bone and organ tissue, and a small amount from fat. People do not lose significant amounts of fat from performing a running or aerobics programme several times per week.

Strength training builds muscle. One pound of muscle will increase your metabolic rate by 50 to 100 calories a day. That means five pounds of additional muscle will use an additional ½ to 1 pound of fat per week. An ideal fat loss programme needs to involve a balanced, reduced calorie diet combined with regular strength training workouts. If you enjoy running, cycling, football, tennis, etc. then do them because you enjoy them, not for any other reason.

If I stop training, will my muscles turn to fat?
No. Muscle and fat are two different types of tissue. Strength training builds muscle; stopping leads to loss of muscle. Over-eating makes one fat; reduced eating loses fat. One kind of tissue cannot be turned into another kind of tissue.
Will women become over muscular if they strength train?
Benefits of strength training for women are well documented. However, many women still fear that it will make them look masculine and unattractive. These fears are unjustified. Men are able to build substantial muscles because they produce large amounts of the hormone, testosterone, in their bodies. It is impossible for women to naturally produce the same levels as men. So, no amount of strength training will give women bulky muscles.

Women are also endowed with a natural layer of subcutaneous fat. This fat covers the muscles and gives women their typical female appearance. Strength Training can no more make a woman masculine than it can make a man feminine.

As soon as you are happy with the way you look, you merely freeze the load. You continue training on a regular basis, without increasing the weight or the number of repetitions. In this way you will remain ‘in shape’.

Can I reduce fat in specific areas through exercise?
No. Fat deposits will show a decrease in size, by diligently adhering to a low-calorie diet for several weeks. However, only a few ounces per day or a little more than a pound of fat per week can be lost. This loss will be from fat stored throughout your body, not just from a particular area that you focus your exercise on.

If you pinch a fold of skin from the back of your hand, your forehead and then your hips, you will notice the comparative thickness between your fingers. If a reduction, of say 10% of fat throughout your body is made, which of the three areas will be noticeably smaller? Your hips will appear smaller; decrease in the other areas will be less noticeable, as each of these three areas will have been reduced proportionally by 10%.

Puckered and dimpled skin is due to three factors:

Over fatness, Loss of muscular, strength and firmness.

Loss of flexibility of the supporting connective tissue in and about the areas where fat is stored. This condition can be combated by becoming and staying as strong as possible and remaining lean. As the muscles strengthen, they become larger and firmer, thus stretching out the skin and unsightly pockmarks, leaving a shapely contour.

Should I strength train if I’m pregnant?

The changes to the body as a result of proper exercise have much to offer expectant mothers, with no harm being caused to the foetus. There are conditions where high intensity strength training would be contra-indicated, but during a normal pregnancy this type of exercise should pose no threat. During labour a woman will experience high intensity muscular contractions. The ease of her delivery will be directly proportional to her muscular condition. Strength training is an excellent preparation for delivery.

What do I have to bring with me to sessions?
Normal training clothes – T-shirt top, track suit bottoms or shorts and trainers, plus a small towel (to place on machines for hygienic reasons) and a bottle of water.
Can I eat before training?
Ideally, two to three hours should elapse between eating and training. If you need to eat before training, have something light, e.g. a small piece of fruit.
END_OF_DOCUMENT_TOKEN_TO_BE_REPLACED

The Ultimate Strength programme has significantly relieved my lower back pain and hugely improved overall fitness levels. Yoram’s tailored, friendly and supportive approach is a world away from previous gym experience and I actively look forward to our weekly sessions.

Being the wrong side of 60 and having read that ‘muscle strength’ wastes away the fastest I decided to go [on recommendation] to Ultimate Strength. Yoram has tailored each individual exercise with each piece of equipment so that if I don’t go to him twice a week I actually miss the ‘challenge’ of seeing if I can improve the number of ‘reps’ he sets.

This website uses cookies to improve your experience while you navigate through the website. Out of these, the cookies that are categorized as necessary are stored on your browser as they are essential for the working of basic functionalities of the website. We also use third-party cookies that help us analyze and understand how you use this website. These cookies will be stored in your browser only with your consent. You also have the option to opt-out of these cookies. But opting out of some of these cookies may affect your browsing experience.
Necessary Always Enabled
Necessary cookies are absolutely essential for the website to function properly. This category only includes cookies that ensures basic functionalities and security features of the website. These cookies do not store any personal information.
Non-necessary
Any cookies that may not be particularly necessary for the website to function and is used specifically to collect user personal data via analytics, ads, other embedded contents are termed as non-necessary cookies. It is mandatory to procure user consent prior to running these cookies on your website.
SAVE & ACCEPT